A geoboard (of order N) is a square board with equally-spaced pins protruding from the surface, representing an integer point lattice for coordinates 0 ≤ x,y ≤ N.

John begins with a pinless geoboard. Each position on the board is a hole that can be filled with a pin. John decides to generate a random integer between 1 and N+1 (inclusive) for each hole in the geoboard. If the random integer is equal to 1 for a given hole, then a pin is placed in that hole.

After John is finished generating numbers for all (N+1)2 holes and placing any/all corresponding pins, he wraps a tight rubberband around the entire group of pins protruding from the board. Let S represent the shape that is formed. S can also be defined as the smallest convex shape that contains all the pins. 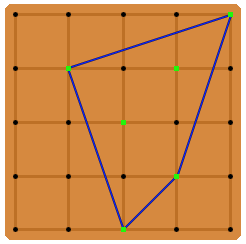 The above image depicts a sample layout for N = 4. The green markers indicate positions where pins have been placed, and the blue lines collectively represent the rubberband. For this particular arrangement, S has an area of 6. If there are fewer than three pins on the board (or if all pins are collinear), S can be assumed to have zero area.