In the game of darts a player throws three darts at a target board which is split into twenty equal sized sections numbered one to twenty. 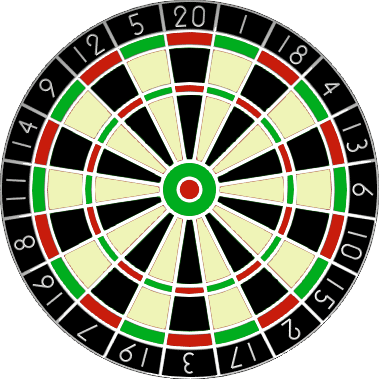 At the centre of the board are two concentric circles called the bull region, or bulls-eye. The outer bull is worth 25 points and the inner bull is a double, worth 50 points.

There are many variations of rules but in the most popular game the players will begin with a score 301 or 501 and the first player to reduce their running total to zero is a winner. However, it is normal to play a "doubles out" system, which means that the player must land a double (including the double bulls-eye at the centre of the board) on their final dart to win; any other dart that would reduce their running total to one or lower means the score for that set of three darts is "bust".

When a player is able to finish on their current score it is called a "checkout" and the highest checkout is 170: T20 T20 D25 (two treble 20s and double bull).

There are exactly eleven distinct ways to checkout on a score of 6:

In addition we shall not include misses in considering combinations; for example, D3 is the same as 0 D3 and 0 0 D3.

Incredibly there are 42336 distinct ways of checking out in total.

How many distinct ways can a player checkout with a score less than 100?